The First CrackMe of The Series - CrackMe1

Before go to the executable, you can find all of my crackmes in my github repository (you can see  in the header of the post as a source link) as an executable and source code. You can look at the source code of the challenge but it will give you spoiler so I don’t recommend until the end of the post.

Most of the time, I will use Ghidra and Radare2 because they are free so you can reproduce the same steps with the same tools. But if you want to learn how to use Radare2, Ghidra or any tools in this post, I will not cover the usage of the tools right now. In addition to that, sometimes we can use the IDA Freeware.

Firstly, I can use the “file” tool to get basic information from the executable.

In addition to that, we can use the “rabin2” from radare2. 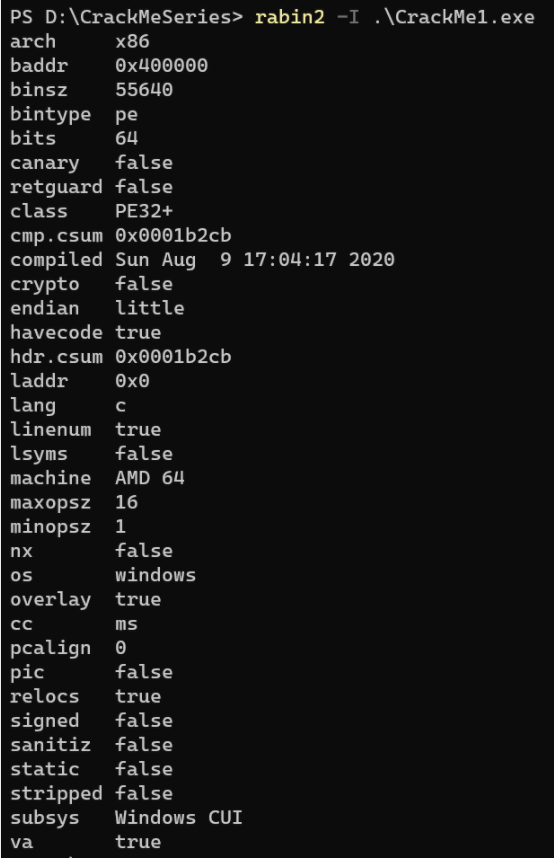 Our executable is approximately 55K so finding the main function is pretty easy as you can see below. 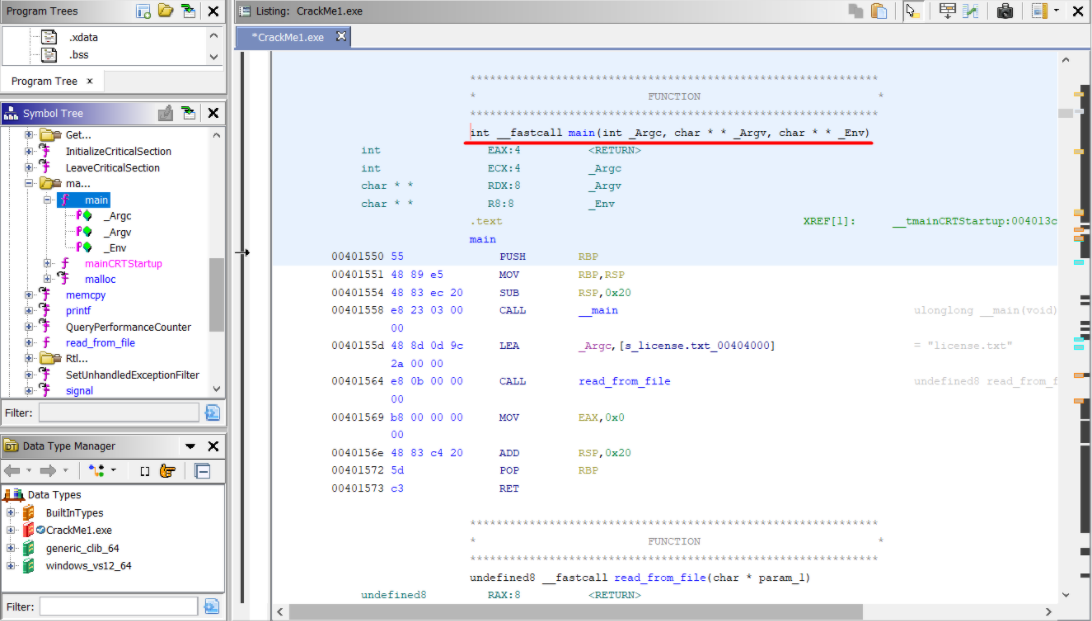 Before diving into all of the functions I will look at the function call graph to understand big picture. 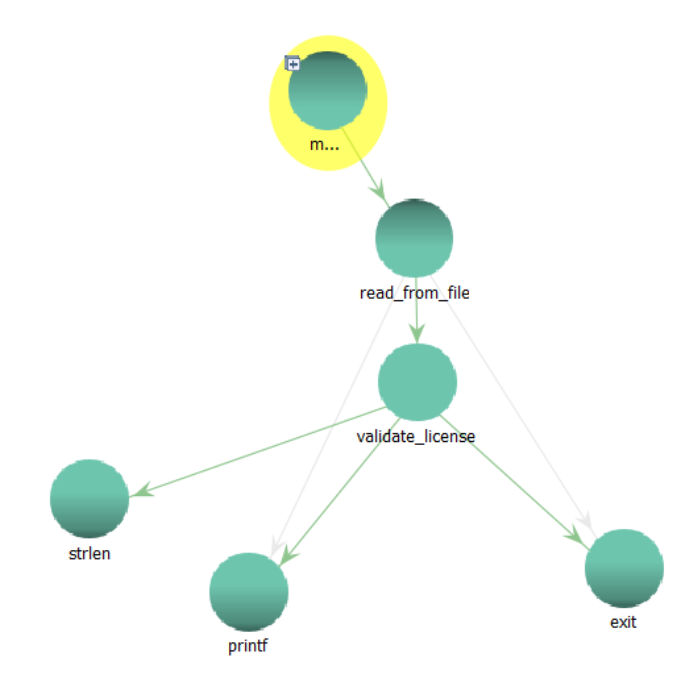 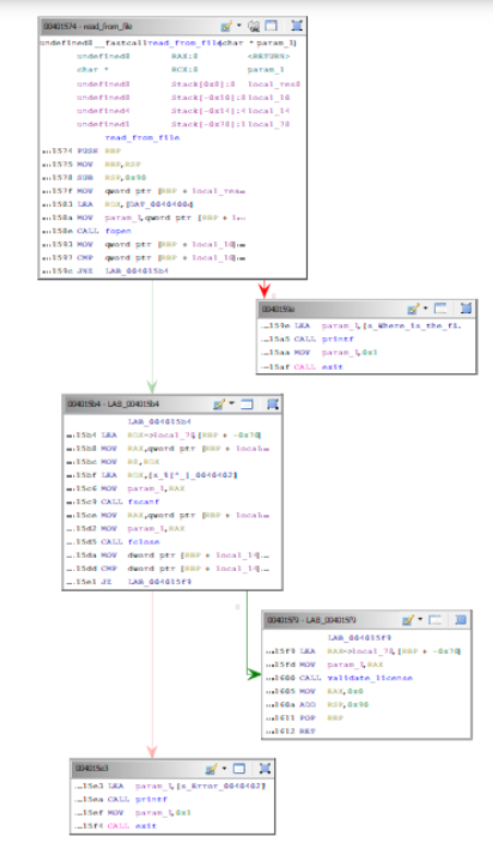 I know they are not legible but don’t worry I’ll take a closer look at these graphs. As you can see above, my guess the heavy work is in the validate_license function probably this function is responsible more than one license control. Now, I will look at the assembly code of the main.

As we know, firstly the prologue part is coming, after that the address of the “license.txt” string is copied to _Argc which is probably the label assigned by Ghidra to ECX register and this variable is the first argument of the read_from_file function. What we know until this step, there is a function named read_from_file and it want probably one argument which is the filename to read of its content. Let’s look at the decompiler window of the main function.

Now, I will go to the read_from_file function. 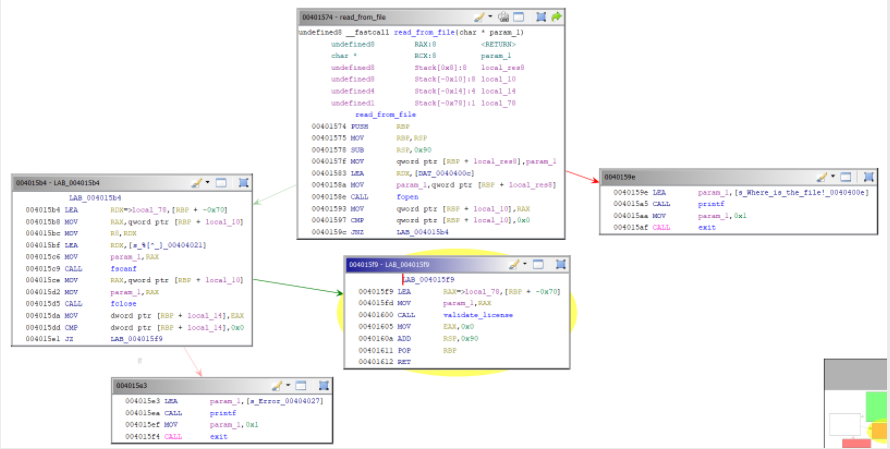 As you can see from the graph, we should trace the green arrows to access validate_license function. Let’s go to step by step from the first box. After the prologue, there are 2 things that catch my attention.

Signature of the fopen function,

Firstly, we see the [DAT_0040400c], this is probably the second argument of the fopen function because as a x64 Windows calling convention the first argument is copied to RCX and the second one to RDX. We know that the first argument of the fopen function is filename so param_1 is the name of the file to be read. As you can see above from the signature of the function, second argument is the mode. If we go to the address of the label DAT_0040400c, we can see the mode char variable. As you can see below, the file will be opened in read mode (“r”), this makes sense.

After that, the return value of the fopen function will be stored at RAX register and compare with the 0x0 value. This is probably controlling the file’s existence because fopen function return NULL if can’t find the specified file. If the program can’t find the file, prints the “Where is the file!” message to the console.

So we will create the license.txt file to be able to bypass this.

As you can see above, I created the license.txt and the error message is changed. So, now, we will analyze the LAB_004015b4 graph.

Signature of the fscanf function,

Signature of the fclose function,

What we know until here is we have to create license.txt file in the same directory with executable. Our new goal is go to the validate_license function. There is couple of interesting things in LAB_004015b4,

Firstly, we know that function parameters will be stored at RCX,RDX and R8 if there is 3 parameters as a x64 Windows calling convention.

Format value is the “%[^\n]”, this means fscanf function just reads the file’s first line. (Until to the new line character which is \n) So we know that, license.txt file should have just one line in it. 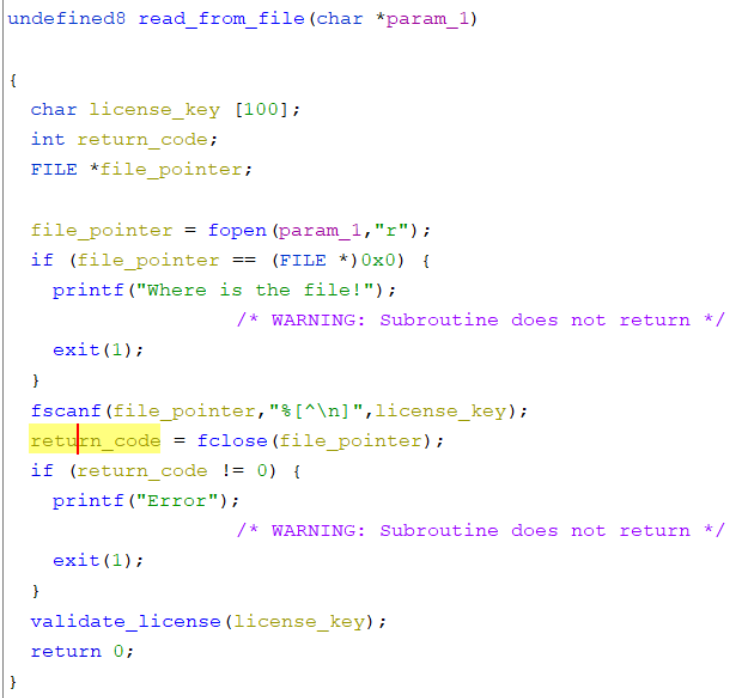 Yeah, if you remember the graph view of the validate_license function, it may seem scary. Let’s look at it step by step.

Signature of the strlen function,

We see some strings and 2 strlen function call in validate_license function.

After that, strlen function is called again with the same parameter(actually there was no need to do this, this could use the [RBP+local_4c] value but nevermind :) and gets the length of the license key. After that compares the license key with the 0x17 which is  23. So, we learn that the license key should be 23 character length.

To summarize the 4 graphs above, program take the first 7 bytes of the license key and compares with “#BEGIN#” one by one. So, we know that the license key should be started with #BEGIN# string. After this point, it will be very difficult to explain code with graph view due to the excessive amount of graphics so I will be using the decompiler view.

I replaced some of the variable names with the more appropriate ones. (sorry for the bad namings :)

As a result, program decodes the encoded string substracting 5 from their ascii value.

So, I can write the python code just gives us the license key like below.

So, I will put this string into the license.txt.

Starting The CrackMe Series - Why?

1 - Starting The CrackMe Series - Why? –> You are here 2- The First CrackMe of The Series - CrackMe1 What is the purpose of this series? I think the best way to learn reverse engineering is...

Deserialization of Untrusted Data in pytorch-lightning

Starting The CrackMe Series - Why?